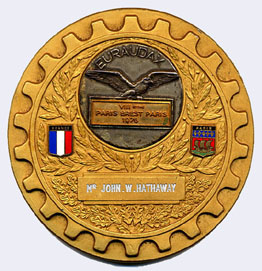 Paris Brest Paris Audax 1976
Medal design by l' Union des Audax Français who organize the 'Audax' version of PBP.
This was John Hathaway's finishers medal from the 1976 Audax PBP. Hathaway's1976 ride was
the spark that lead to the introduction of randonneur cycling in British Columbia and Canada. 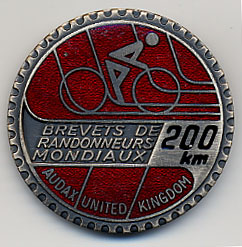 Here's a slightly enlarged Audax UK 200 medal. It's Dan McGuire's from 1988.
(The other pins on this page approximate the actual size.)

I don't know what this pin is exactly - it was in the baggy with John Hathaway's pins. (Harold Bridge is the executor of the John Hathaway pin baggy.) Perhaps it is an AUK pin acknowledging a PBP completion? [Additional, Nov 2007:] Some dating info about this pin has been offered by David Minter from the Australia: "[The pin] shows an AUK PBP medal/pin that was awarded up till the early or mid 1980s." 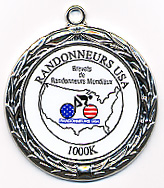 Randonneurs USA awards a 1000 km medal to anyone who accumulates 1000 km in one season in RUSA brevets. Wayne Harrington earned this particular medal - he rode 1600 with SIR (Seattle) in 2002. 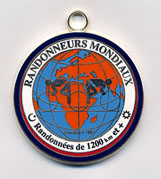 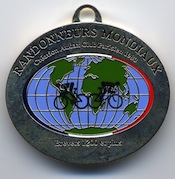 Randonneur Mondiaux medals are awarded for the completion of a 1200k Grand Randonneé (or more). The first one (on the left) was designed by Jennifer Wise, from the USA, RM President 1995-1999. The second one (on the right) was designed by Hans Dusink, from Australia, RM President 2003-2007.
A new RM medal design effort began in 2013. The new RM medal will be introduced in 2014.
Thanks to Jennifer Wise for helping us sort out the RM pins chronology, and designers in 2013.

The Can Am pin for completing a 1200 km brevet in both Canada and the US in the same year.
The one on the left is Gary Baker's pin from 2009.
Stephen Hinde took a photo of the one on the right at the awards ceremony at the 2012 Rocky Mountain 1200. 2012 pin design by Ali Holt.