It was Oliver Portway from Australia (PBP 1995, 1999) who was able to sort out who is who in the photos below. The photos themselves are from a gallery called "Les premiers arrivés à Saint-Quentin-en-Yvelines" on the quasi official PBP web site "la Web-tv." Oliver used a combination of the images from the Villaines-la-Juhel, where the frame and helmet numbers are sometimes visible, the official Maindru photos and his own knowledge of the riders to put the puzzle together. I had heard that 10 riders came in together, and indeed this is what the photos below indicate. However on the results list you will notice that Michel Mignant is 15 minutes ahead of the group, and that there are only 8 others 15 minutes back... so someone is missing. Oliver speculates that Mignant started in the second 80hr wave (at 8:15 instead of 8:00) and somehow crossed the gap. (Incredible if true.) Oliver thinks that missing rider is Bertrand Lavelot - he's in the photo below, but his time is 46:48, 2 hours slower. It looks like Bertrand did something naughty and was penalised. It would be interesting to know what. The one rider who Oliver couldn't identify was Herve Talabardon... some may recognise the name. He was an early finisher in both PBP 1991 and 1995. I think that the wacky photo montage from the 1995 plaquette confirms that Talabardon is our guy. Notice that Lavelot is also in the picture. And just for fun here's a photo of Talabardon from the 1991 plaquette. [Eric F, October 2007] 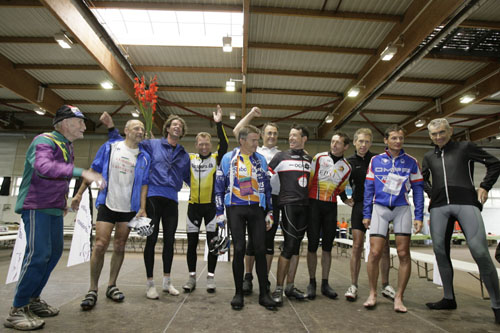 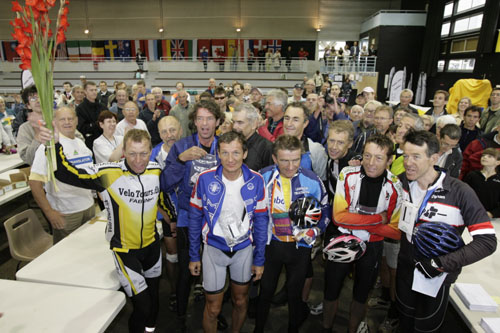